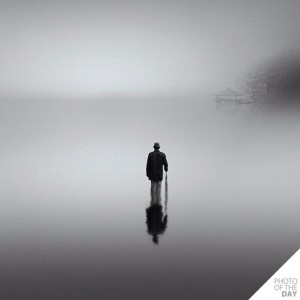 A man drops the mask only after he lets go of the instinctive fear lurking deep down inside. He feels the march of the ants, the roving herd, the compression of gravity, and his pull towards them is definite, as if set in stone. To play a role he never conceived, he never chose, and living upon its script as a habit compelled by the veiled influence of a law he’s never clearly known. He needs to see that it is not necessary to believe in this clad of social armour. It is enough that he simply wear it, without having to believe in it. The flock will not suddenly reject him as if to an intruder. He will not be exiled for changing who he is inside. The mob is blind to the layers inside a man. But he, as a single individual, can hope to see. Possibilities exist for a lone cell that are otherwise impossible for a mass of them. He must stir himself out of the slurring sense of wakefulness to which he is accustomed and turn his eyes on the road never traveled. By exhaling, by letting his shoulders drop, and his muscles relax, he can discover what it takes to stop lying to himself.