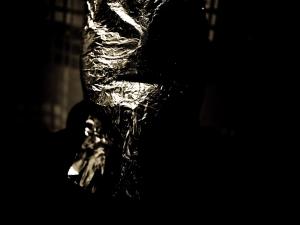 Both above and deep inside him, each man has special instincts to tell him what is right and wrong. Along with a persona that forever forsakes the moment which is now, this instinct sleeps and slowly shuts itself down. Men fail to listen to the subtle alarms they were born with, following instead rules that were dinned into each schoolboy as they were indoctrinated through the system of education. Man-machines follow by rote the writ of societal law, losing all sense of the organic and natural sense of justice that is their birthright. Animals follow the rhythm of nature while men rely on the ink that changes meaning with passing time and is subjectively different depending on where they were raised. Inside, deep inside, a man knows, but on the surface he is enslaved by habits and fear. A pang of guilt replaces the organic emotion of remorse, and men therefore behave more from fear of loss and consequence than from a simple sense of sincerity. However much it is buried, and to whatever degree a man insists on ignoring the whispers which dwell within him, his conscience remains intact, and it awaits the moment when he welcomes this ancient faculty back into his life.